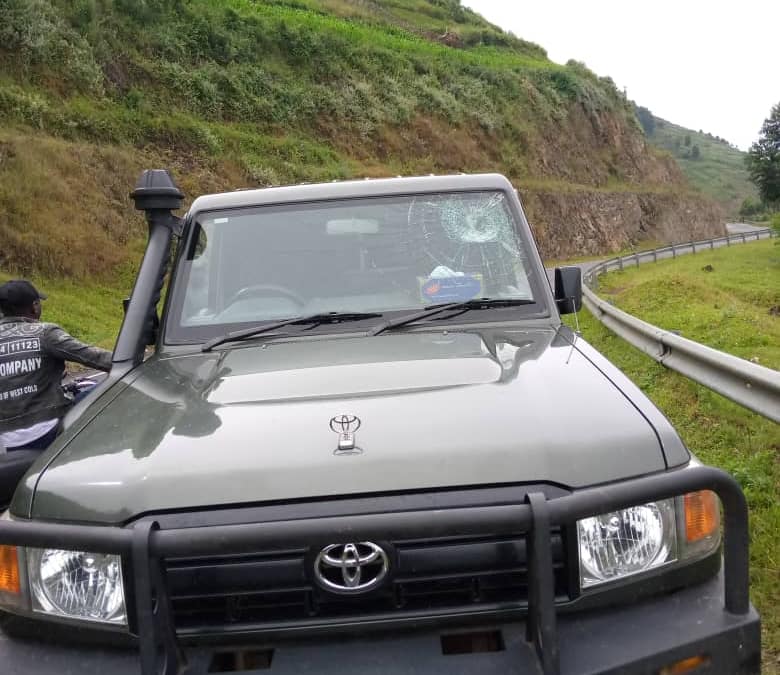 Authorities in the western Kisoro District are investigating a string of attacks by locals on UPDF and Police officers patrolling the area. A brand new Command Vehicle for 35th Battalion Commanding Officer in Kisoro. The screen was partially shattered by stones pelted by elements disobeying curfew rules on 12th April at 21:00 hrs 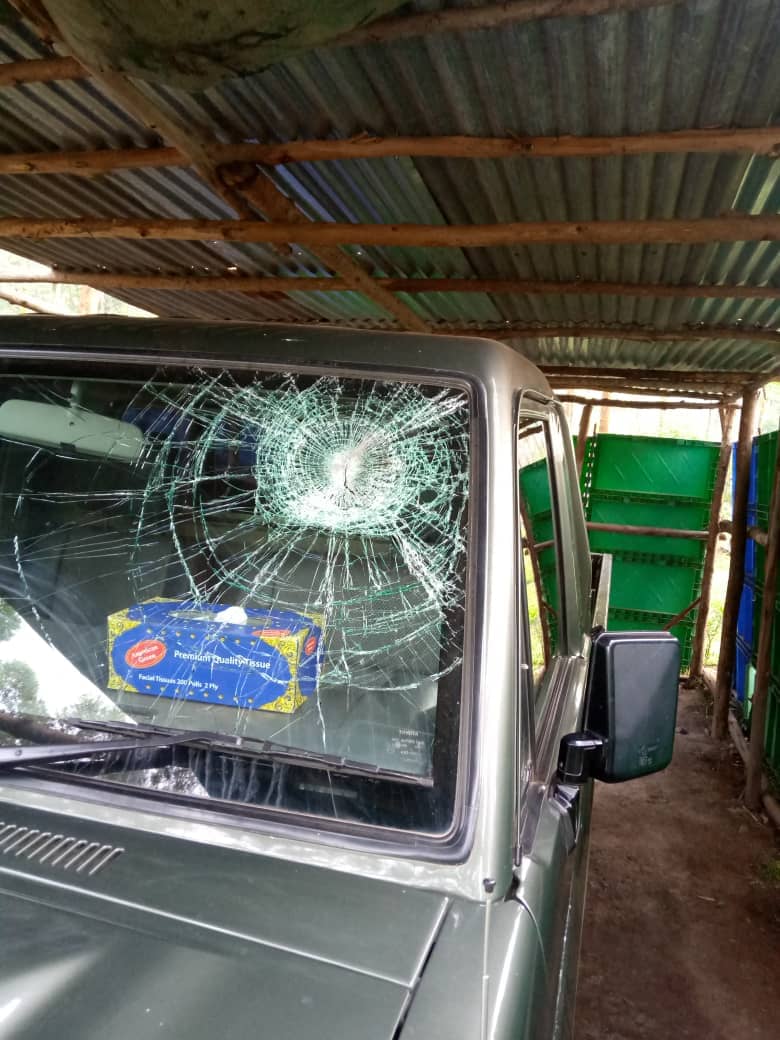 The locals, he says, have resorted to stoning their patrol teams especially in the night hours.

Last week, according to Bataringaya, a pick up belonging to Kisoro Municipal Council was stoned and its windscreen broken.

The commander adds that on Tuesday, a UPDF officer on patrol was injured on the head, while on Easter Sunday his own official command vehicle registration number DO2DF103 was also stoned and the windscreen broken.

“People have resorted to stoning our patrol teams especially during night hours. This must stop because the outcomes next time might not be good. We can’t be intimidated; we have to implement the president’s directives,” he said.

He noted for instance at Mubuga primary school where some youths were found playing football and when police tried to stop them they begun fighting the police officers and in the process one of the youths was shot in the leg.

Dictator Yoweri Museveni yesterday warned Ugandans against attacking members of the armed forces, which he termed as a suicide attempt.

Ugandans who attack police officers and the army, especially those that don’t have anti-riot gear, Museveni said, risk being shot.

Reactions of Some Ugandans on Kisoro Locals

prospakadogo🇺🇬
@prospakadogo
Not condoning throwing stones but I don’t think any retaliation from Ugandans would be happening if our army itself hadn’t been culprits at times of brutality themselves.
Ogwetta Andrew Otto
@OgwettaOtto
The question is how your officers interpret Curfew rules. I think citizens have a better interpretation of the rules than your officers.

Alice Ruhindi
@AliceRuhindi
How come you never condemn attacks on civilians by security operatives? LDUs have been beating up people in their own homes, stealing food from fires & sexual assault on women. What do you say to that?

Ernest Wisdom Kiyonga
@Ernest_Wisdom
Have we ruled out a flying stone? It can cause less, equal or greater damage.

John Nsamba
@jnsamba
Sorry sir. But Pastor Muwanguzi was badly tortured by your people. Why are you silent on such?

moses
@cracstmoses
Great work by those elements, I wonder how many of those elements u killed since u have proved good at fighting innocent civilians

Misterious🦋💕
@BreshBresh
….Advise the president to give us a break not to extend the lockdown coz more than that is coming! Some rules don’t apply in some areas.

Mago Emmanuel
@MagoEmmanuel2
This how awind screen can be shattered wd stones. Not the one of Arua ….where agroup were accused of stoning pm7 car

IbrahT
@256ibrahim1
At this point there is need to work on your mode of operation. UPDF has always been well with people until it associated with the LDUs

Charles Friday
@CharlesFriday20
I think civilians are hungry not anger

David Mpagi
@avrain27
Taxes will fix that and they are paid by the same people. So no worries there

Mwesigwa Daniel
@MwesigwaA
This happens because the peace keepers themselves are using excessive force. Though citizens have to obey the law put in place. If its past time why the heck dont you do what you’re told to do!!!!

Nansinguza Jacob
@NansinguzaJ
The president was categorical in his response to this issue.

Ishenkuru Abashambo 💯
@nelson_tusiime
Why would a sane Ugandan throw a stone to a government facility or vehicle? It’s like setting your own house on fire. Whatever the reasons this is thinking below the standard.

Aaron Ninsiima
@AaronNinsiima2
You have been told by the president that if anybody fights you, also fight him back until that person looses appetite of fighting you and finally arrest him.

Francis ndagije
@Francisndagije1
I didn’t know that kisoro People can do that to security vehicle.They are well supporters of this government and they love our brothers in arms.i think this vehicle is in muko. Rubanda district.

Francis ndagije
@Francisndagije1
This would be a shame to kisoro people. I know what UPDF has done to people of kisoro.

Joseph Runnel Lule
@JosephRunnelLul
Anyone who provokes an armed personnel you wonder whether they do think straight, such a worst case scenario.

Luke Twesigye Behweera
@Luketwesigye20
May be the way you approached them was unfriendly. The best way to make civilians understand you I’d by talking to them with caution than beating or harassing them.

Omoding
@Omoding51641993
‘You beat me, I beat you until you lose appetite for beating me’. This should apply to both. The soldiers beat civilians mercilessly and just one small scratch, they open their mouths like last borns.

Paul Collins
@paulcollinsone
So this vehicle is 35 Billion? God have mercy!

RICHARD ANDERSON
@RICHARD96802998
surely those people who attacks forces should be punished because it means they are iddles why should you not be home during curfew hours? Bars clubs were cinemas were all closed why would you waste time fighting with peace kepers ?

[email protected]
@A77Sseru
I recall during the 2011 elections the I was a lieutenant we wa patrolling the areas of rwenzori our commander being a lady then locals in the area started throwing stones at us . The lady told to put our guns on the back got sticks we taught them a good lesson.

@StephenLoyep
@LoyepSteve
Dear countrymen, Kindly follow the directives, accord respect to our brothers and sisters in uniform. What they are doing and going thru on daily basis is a sacrifice for our security and peace. No one better understands the pain of being always away from the family.@AKasingye

tashana geofrey
@GeofreyTashana
That’s so unfortunate bt UPDF is becoming so lenient to indisciplined Ugandans . Such fellows deserve to be handled with an iron hand. Thank you for yo services

Medson A.B
@ABishanga
I think as the preident said something has to be done to freez them not to think about it next time …self defence

Michael
@lukesemujju
It’s very bad and Dangerous a civilian to attack a Soldier. It’s like touching in a Leopard’s anus!

arinaitwe prosper
@ArinaitweProsp4
acts of attacking security personnel and vehicles should be condemned and must stop. One might think it’s done under putting Presidential Directives in place when the culprits have other hidden agenda

Miccahwave kabuzibiri
@Miccah941
But there are patrol cars. A lot of them U can’t risk such a car to do enforcement.

Kayiwa
@Kayiwa85802119
Am humble, for God and my Country, salute!, God’s words help to make people’s hearts humble, but not, to protect us security is security, for these who mess with security they need some silent lessons.

elumala
@elumala13
& colleagues for yo fellow brothers coz they act as if un trained. FOR US WE LOST HOPE IN YOU.

Nahurira F
@f_nahurira
Its obnoxious and regrettable to see that from the citizens however i believe there is a small group that is specialised in attacking security so do more inner job with in the citizens.

Wright Gilbert Mugisha Sibbo
@MugishaSibbo
You as security agents also behave as If you aren’t humans. You want to treat Ugandans like slaves…in their own country ..some agents act like they haven’t had a meal for a week..so they want to revenge their anger on Poor Ugandans.

Leus Mbale
@MbaleLeus
But on my side view j wanted to say let police and UPDF to act with high force.

Leus Mbale
@MbaleLeus
That was bad

Gakinya peter Chege
@ChegeGakinya
Regrettable but lets not brutalize our our patriots. UPDF has earned a reputation when it comes to enforcing rules on the wananchi.

Sarah O
@serahsarai
Too absurd, the security agents are forcing individuals to protect their lives. Kitalo!

julio
@chobejkv
How are these pics corroborated to your narrative? You just want justify terror against citizens. Even Arua Saga is stil fresh.